Wednesday, November 6, 2019 started off as an ordinary morning. The kids were eating breakfast, I was getting laundry out of the garage, hubby was preparing for work, and the dog was underfoot. I felt slightly achy and was contemplating calling into work to have a day to relax. As I approached the door to the kitchen from the garage, I felt a strange “pop,” and thought my water had broken.

But how could that be? I wondered. I’m only 32 weeks…it’s way too early for that, right?  Slowly I looked down at the floor in dread, realizing that this was no normal phenomenon. I was hemorrhaging. I gasped “No!” and immediately held my stomach as if to stop my baby boy from leaving too soon. Deep down, I feared he was already gone and I began to panic.

Somehow, I composed myself enough to peek my head into the kitchen and instructed my son to “go get Daddy, quick quick quick.” A minute later Donald opened the door and all I could say was “we’ve gotta get to the hospital.” Thanks to him, all four of us were in the car in less than 10 minutes and en route to the hospital…a scramble that’s mostly a blur to me now. As Donald called ahead to the hospital, I prayed silently in the passenger seat for my baby, terrified as I rubbed my motionless, lopsided bump. Is this it? I wondered. Would I get to the hospital and deliver a lifeless baby boy? Please God, no. Through the firestorm in my mind, I reassured DJ and Lila that everything was fine, and that mommy just had to go to the doctor.

We pulled up to the hospital, I got out at the front as they went to park the car. My brave face crumbled as I approached the information desk and sobbed to the security guard “I think I’m losing my baby, I need to get to the 5th floor please?” She immediately assisted me into a wheelchair as I apologized for bleeding everywhere. She looked at me strangely but sympathetically, and assured me that that wasn’t important, then briskly wheeled me to the elevator and up to level 5. We entered the security door and the nurses appeared to be awaiting my arrival. I had forgotten we called ahead. Through tears, I briefly explained what had happened at home, how far along I was, and other information they asked. I must have given them license and insurance information but I have no memory of it.

Immediately I was brought to a labor room, as Donald and the kids followed.  As the nurse checked my vitals and put me on the monitor, all I could ask was if there was a heartbeat. I finally heard someone say they found a heartbeat, but it was slow and weak. All of a sudden, there were at least 15 people surrounding me. The doctor was one of them, and I remember him clearly asking me to sign consent for an emergency C-section. I was so concerned with the baby, I hadn’t realized I would need surgery. I hadn’t thought about my own condition at all. I heard comments regarding my blood loss, but I did not focus on it. (Now I know that I was probably going into shock because I was losing so much blood.)

I asked for my glasses to read the consent form. The doctor looked as though he wanted to shake me, but instead he urgently advised me again to sign the paper, as time was of the essence. Again, I was clearly unaware of my condiiton. In the corner of the room sat DJ and Lila, completely mystified at all the commotion but momentarily distracted by PinkFong videos on Donald’s phone. I kept reassuring them that everything was fine, even as I wondered if that were actually true. Donald was in and out of the room, talking to the doctors, holding my hand, and watching the kids.

It was only a little more than 15 minutes from my arrival that I found myself being wheeled to the operating room. I took a deep breath and prayed to wake up to a healthy baby…and just to wake up. The last thing I remember is a burning sensation in my throat as the anesthesia swiftly forced my eyes shut.

When I woke up in recovery, I asked the nurse where my baby was and if he was okay. She said he was doing great, and then she told me he weighed 2 pounds 12 ounces. My heart sank as I tried to picture what he looked like. Is he going to survive? I wondered. Is he on oxygen? The nurse also informed me that all this began because of a severe placental abruption, and that I had received platelets because of it. She smiled, squeezed my arm, and told me I was lucky to be alive. I remember smiling back and saying thank you for everything. Even after hearing this, I still did not fully acknowledge the seriousness of my condition. Everything was about my baby.

Donald told me that everything was fine as well, and that even though small babies are normally air lifted to a larger hospital hours away, the pediatrician said that was unnecessary because our baby’s vitals and overall health were exceptionally good. That news definitely cheered me up and I felt hopeful that everything would be okay. Also, DJ and Lila were safe and sound with friends of ours. Soon enough, the nurse wheeled me down to the nursery to meet him as Donald walked beside me. My heart was pounding in anticipation and dread…and guilt because of the dread. 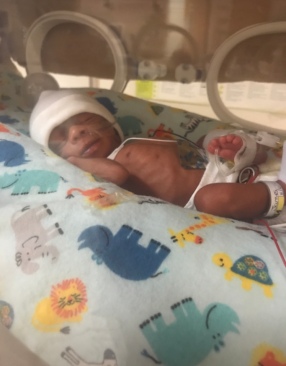 We entered the nursery. Kingston’s tiny body was connected to tubes and beeping machines, and his small, bony face was barely visible through the CPAP on his face. I felt overwhelmed with sadness and disbelief at his size. Why did this happen? Why did he come early? I never had to deal with this before, why now? The nurse encouraged me to hold his hand since I could not hold him yet. I touched his extremely tiny fingers and smiled as his reflex squeezed back. My baby boy, I thought. Despite his size, despite his appearance, he was mine. I finally looked around at the nurses who were telling me all the amazing things he had already conquered. That day, the biggest achievement was that he did not need to be flown to another hospital. He was stable, he was healthy.  He was, they said, a miracle. My shift nurse looked at me and whispered, “So are you. Unbelievably strong mama.”

I felt anything but strong. Powerless was more like it. I smiled through my tears as I said hi to Kingston, and made sure to say his name more than once. I thought to myself: besides pumping, this is all I can do right now. Even though that saddened me more, I felt determined to do whatever I could for him. He was early, but he was here. And our month long journey began (another post, coming soon!)

Today is Kingston’s due date: December 30, 2019. He is now 5 pound 15 ounces, eating well, and thriving. He broke all sorts of records in the hospital, and he continues to amaze us and break records left and right. Best of all, he brings joy to our home each day. I am blessed and proud to be his mother, and I am truly excited to see all the great things he will achieve. He beat the odds at 2 pounds– what’s next?

This is a text widget, which allows you to add text or HTML to your sidebar. You can use them to display text, links, images, HTML, or a combination of these. Edit them in the Widget section of the Customizer.
Loading Comments...
%d bloggers like this: